Read the Bridges Annual Report for 2015. 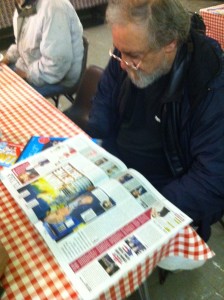 Bridges offers services designed to help homeless and vulnerably housed people in Newham (and the surrounding area) to bridge the gap between ‘social exclusion’ and ‘mainstream society’. We seek to meet the physical, material, emotional, and spiritual needs of our clients, primarily through the provision of a free hot-breakfast service, and friendly, supportive conversation on Saturday mornings.  Bridges is an independent charitable organisation that has grown out of the work of Memorial Community Church, Plaistow.  The services offered by Bridges are open to all, and we aim to ensure that no-one is excluded from them on the basis of their race, gender, age, disability, sexuality, social standing, history of homelessness, religious beliefs, ethnic or national origin, or refugee status.

It is the aim of Bridges that the services we offer will assist clients to grow in self-esteem and self-respect, essential for meaningful and long-lasting social reintegration.  To this end, Bridges seeks to produce a safe environment within which clients and volunteers can work together in partnership.  Bridges will not tolerate violent, abusive, or otherwise intimidating behaviours from either service-users or service-providers.  The work of Bridges is grounded in and motivated by the Christian faith of its founders and of many of its volunteers.  Bridges desires to express to our clients – through meaningful action and active listening – the wholeness of God’s love.

Bridges is staffed by volunteers drawn from the local area.  We are committed to building up the volunteer team that delivers Bridges services so that it grows into a mature, strong, and faithful body, and we undertake to encourage members of that team in their diverse gifts and skills.  Bridges recognises that its volunteers are instrumental in delivering all that we offer to clients, and seeks to ensure that all members of the team are both adequately trained in and regularly consulted about organisational policies and practices.  Within the volunteer team, and across the organisation as a whole, Bridges explicitly values the input that is provided by clients and former clients.  We aim to nurture user-involvement at all levels of Bridges, and wherever possible to be user-led in all that we do.

Bridges seeks to operate alongside other local and national agencies that offer support to the same (or similar) client groups.  It is the desire of Bridges that we will persistently improve, develop, and extend our own existing provision, in order to meet more fully and more adequately the needs presented by all who make use of our services.

Bridges began in 2005 when Lesley Wildman (one of the co-coordinators) first started talking to the homeless people she saw regularly at the end of her street. She felt drawn to them by God, but did not understand it straight away. But then she was reminded that Jesus said that we would see him when we bent down to the most vulnerable. She had the idea to put on a Christmas dinner that year for them, persuaded the church to fund it and gathered a team of women to help.

Early in 2006 this same team funded by collections after the Sunday services began a Saturday breakfast , regularly feeding between 15 to 25 people.

The project became established, expanded the volunteer team and sought funds from Transform Newham, Newham Voluntary Sector Consortium and individual donors. In 2008 a formal committee was established and further services developed, and more people came. On a typical Saturday in 2013 we serve over 80 breakfasts. We have received funds from Tear Fund, and Zuriel Foundation and launched a “buy a breakfast” scheme.

Since we began we have had contact with nearly 500 individuals. There have been sadnesses along the way – we hear of clients dying of their illnesses or suicide. It is heartbreaking at times to see people we know well throwing away one opportunity after another.  However we have had many success stories, of folks with our support encouraged and empowered to move forward, crossing the bridge from homelessness and/or breaking their cycles of addiction.  We have links with several substance misuse agencies including Teen Challenge and DASL and we also have links with Anchor House and the Renewal Programme. We are not complacent and know that there are always fresh challenges ahead.

Bridges is a charity run by an enthusiastic team of volunteers

Trustees of the charity:

Richard volunteers at Bridges around once a month on Saturday mornings. He chairs the organising committee, and has in the past worked in voluntary sector agencies (Thames Reach, Salvation Army London Homeless Services) that support rough sleepers in London. Outside Bridges, Richard works in higher education.

Brian joined the team in 2007and coordinates the project with Leslay Wildman.He is at the Saturday breakfast three out of four weeks, he also meets with clients during the week. Brian is an accountant and so is also the Charity’s treasurer. Outside Bridges Brian has worked as an accountant in the TV industry for over twenty years.

Tracey volunteers on Saturday breakfasts once a month. She is the secretary for Bridges, and works on social media and fundraising. Outside of Bridges, Tracey works at a charity where she leads on supporting charities to access government administrative data to measure the impact of their work.

Jill makes  porridge most Saturdays as one of the team of cooks. She has been part of Bridges from the beginning and was involved with Newham Night shelter prior to Bridges. Jill is passionate about making all people feel valued and empowering them to play an active part in making change happen in their lives. In her main job, Jill is involved in therapeutic work with children.

Lesley is joint project co-ordinator of Bridges and runs the Monday drop-in sessions as well as volunteering on a Saturday. She has lived in Newham all her life, has three children and six grandchildren. She also volunteers at a local Youth Work project. Prayer and Grace are core to her commitment to help and serve others.

A team of volunteers

Awards for All (Big Lottery)